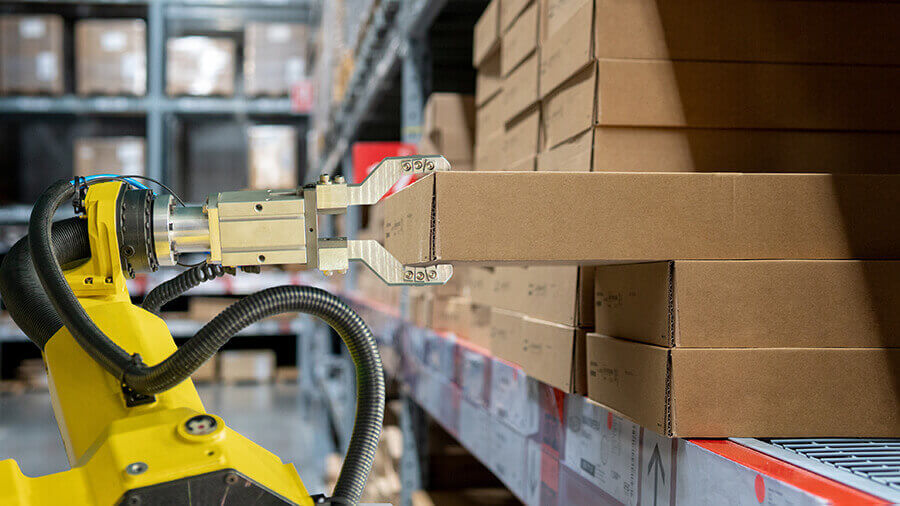 Working in a warehouse can be physically and mentally draining due to the physical nature of the job. Warehouse workers spend their days lifting, reaching, and walking throughout the warehouse, among other tasks. In an effort to address the physical and mental toll on employees, as well as improve efficiency and accuracy, many companies are adopting certain technologies in their warehouses that aid workers, making their day-to-day tasks easier and less taxing, and thereby improving job satisfaction. Rising technologies such as automated guided vehicles (AGVs) and automated mobile robots (AMRs) allow companies to automate processes that have long been assigned as manual tasks. While there used to be some fear that these automations may put warehouse workers out of a job, they have proven to be an extremely useful tool to be used alongside manual labor, and have even become an incentive for warehouse workers when choosing which jobs to apply for and accept.

Implementing new technologies in warehouses can not only increase performance and accuracy, but can also decrease the physical demand placed on workers and improve their safety at work. According to the Bureau of Labor Statistics, forklifts are one of the biggest culprits of workplace injuries in warehouses. Automated forklifts can lessen that impact and remove workers from harm’s way. Automation can also be utilized for other potentially dangerous tasks such as heavy lifting and can even safely clean and sanitize workspaces, which is crucial in the wake of the Covid-19 pandemic. Technology has become one of the most important factors that warehouse job seekers look for in companies they apply to and interview with, according to a new study done by Lucas Systems. Surveying 500 on-floor warehouse workers around the U.S., the study found that 74% of workers valued technology over pay, specifically technologies that would allow them to do their jobs more efficiently, and that it can be a determining factor for which jobs they take. The study showed that warehouse workers see a company’s investment in technology as a direct investment into their employees, making them feel more valued and taken care of.

With the rise of artificial intelligence and robots being used in warehouses, there have been some concerns about what that will mean for the job security of warehouse workers. This study found that 3 out of 4 workers see robots in the workplace as beneficial allies, and not as a threat. Some of the benefits of utilizing robots in warehouses include reducing physical stress on workers and achieving better speed and accuracy in item picking. The study also found that a majority (75%) of the respondents felt that the physical strain of their job takes a bigger toll on them than the mental strain, therefore proving the potential and value of robots and other automated technology that can help to lessen that strain. There is, however, a fear among some warehouse workers that with improved speed and accuracy may come increased quotas that would be difficult to keep up with.

The results of Lucas Systems’ survey showed clearly that implementing technology in warehouses can be a way to attract and retain the best employees. During a time where we are facing a national labor shortage and companies need to be competitive in hiring, utilizing these technologies is more important than ever. According to the Global Warehouse Automation Robots, Technologies, and Solutions Market Report, more than 80% of warehouses today have no automation whatsoever, and only 5% of warehouses are using sophisticated automation equipment and solutions. Since we know that these technologies are deeply important to warehouse workers, there is an immense opportunity to bridge this gap and use technology as a way to not only improve efficiency, but to create loyalty and satisfaction among employees working in warehouses. Lucas System’s report showed that 74% of workers plan to stay with their current employer for at least 3 years, and 35% plan on staying longer than 5, however they feel that improvements are necessary to make their jobs easier and less stressful.

As automation begins to become more widespread in warehousing, there will no doubt be challenges along the way, including training workers to properly use the technology, however these technologies are greatly benefiting the industry overall. From keeping workers safe by assigning more dangerous and physically taxing tasks to robots, to improving efficiency and making everyday tasks less tedious, automation technologies are generally favored and sought out by warehouse workers. In 2020, there were three times as many automated mobile robots sold for use in warehouses and logistics operations compared to 2018, and that number is only expected to grow. By using these automations in their warehouses, companies can allow workers to focus on more meaningful and fulfilling tasks, inevitably improving their job satisfaction. At the end of the day, a company’s investment into automation technologies is an investment into the well-being of their employees, and those employees are taking notice. Warehouse technology can play a huge role in attracting and retaining talent, which is an added benefit to its time and energy-saving capabilities. It’s only a matter of time before this kind of technology is considered the norm and is rolled out to warehouses everywhere.